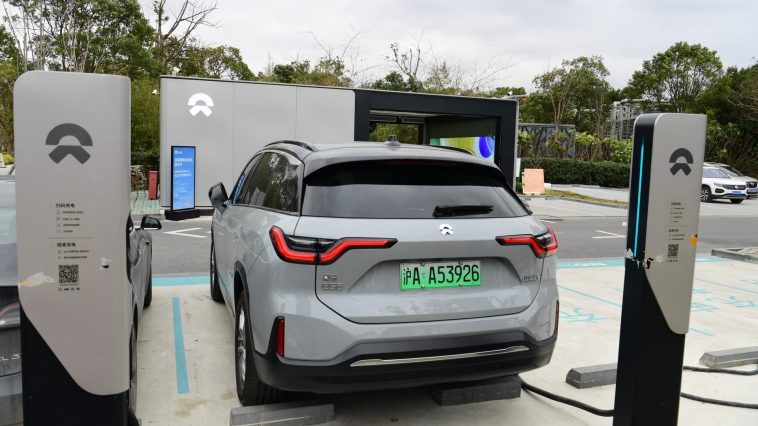 Despite Covid restrictions in some parts of China, Chinese electric car company Nio delivered more than 5,000 cars in April, a sharp decrease from nearly 10,000 deliveries in March.

Due to rising raw material prices, the Chinese electric carmaker has had to raise prices.

Nio’s had to temporarily halt production after Covid controls prevented the company from receiving parts from suppliers in April. However, the company claimed that production was able to resume a few days later.

Despite this, Li continued to describe China’s overall state of auto production as in the process of recovery on Thursday, while Shanghai and other parts of the country remain under Covid control.

Even if the Chinese government reduces subsidies or other policy support for the sector, Li expects consumer demand for electric cars to remain strong.

Despite Covid restrictions, Nio delivered over 5,000 cars in April, a significant decrease from nearly 10,000 deliveries in March.

According to the China Passenger Car Association, passenger car sales fell 35.5 percent year over year in April, but sales of new energy vehicles, which include battery-powered electric cars, increased by 78.4 percent.

In an interview with CNBC’s Emily Tan, Li, who is also Nio’s founder and chairman, discussed the company’s secondary listing in Singapore.

Nio completed a secondary listing on the Singapore Stock Exchange by way of introduction on Friday, which differs from an IPO in that no new capital is raised and there is less paperwork. Rather, the listing allows investors to trade the company’s shares on a different exchange than the main trading venue.

The auto executive did not elaborate on why Nio chose Singapore as the third listing location, but said it would allow the company to reach out to more investors.

However, Nio plans to export cars to Southeast Asia and open a research and development center for artificial intelligence and autonomous driving in Singapore in the near future, according to Li. He did not specify any dates.

So far, the company has concentrated most of its international expansion efforts in Europe, particularly in Norway.

The NYSE, where the company held its initial public offering in 2018, remains the company’s primary trading venue.

Nio’s stock has risen by about 150 percent since its IPO, a tumultuous three years that included several quarterly drops and a full year in 2020 that saw a gain of over 1,100 percent.